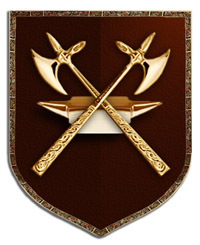 Axe and Anvil is a guild built on respect, and the forging of new friendships. The axe and the anvil are symbols of these principles. The members of the guild wear their tabard to show respect for individuals, and to invite to friendship. A small guild, they carefully pick their members, to ensure that all Axes follow the same underlying principles.


Past and present Edit

Axe and Anvil was originally founded by the three dwarves; Dirahm, Cromgar and Maghtor. It was founded as a smith and miner's guild primarily for dwarves. However, the guild has evolved over the seasons to include honourable people of all races and professions. Today, Axe and Anvil is a group of individuals from all walks of life. There is a high level of craftsmanship within the guild, and its members endeavour to further their skills within their chosen trade. The Axes also seek to protect those who cannot protect themselves, and are committed to defending the security of the people of the Alliance. The respect and friendship forged on the anvil, is what keeps the Axes together.

2. Anvilmaster: Officer of the guild. Lieutenant to the Grand Axe and takes up his duties in his absence.

All Axes are equal, and our ranks imply responsibility rather than prestige.

The headquarters of Axe and Anvil are based in Ironforge

All Axes will receive friendly people with respect and tolerance. Enquiries of a more official nature can be directed to any of the guilds officers; Dirahm, Cromgar, Maghtor or Snakefing


Retrieved from "https://scarteleu.fandom.com/wiki/Axe_and_Anvil?oldid=56795"
Community content is available under CC-BY-SA unless otherwise noted.