Few lines from books about noble history of Lordaeron Edit

Lordaeron castle - In noble family of La Hire was new baby born, even when Human alliance still suffers from losing of Stormwind, this day was lucky for family of La Hire and many people. Healthy baby girl was born, named Barbara, Barbara La Hire. For family of La Hire it's lucky day, because they after many years of trying, baby was finally born, so was born another member to bloodline to be called in proper title when she grew up and will be able to continue in steps of her ancestry.

Lordaeron castle - Legions of horde rushed on shores of Eastern Kingdom, slowly fighting their way up to Lordaeron, Few noble families decided, after hearing news that Horde will attack castle, to travel to safety, travel to east. One of those families was family of La Hire, with three years old girl Barbara which are their only child. Even when war is raging around, families goes to east.

Lordaeron castle - Very sad day for many families which fled from horde few weeks ago, with great mourn in our hearts, we must say to people of Lordaeron, that those who left are dead. Early in morning big package of stinky something flew over walls of castle. Something stinky wrapped in fur and dirty clothes appeared to be package of heads of members of those families who left few weeks ago. Only heads who weren't there were heads of family La Hire who surely left as well. As soon as battle will fade out, they will be noted as missing.

Lordaeron castle - Two years have passed since end of second war, members of family La Hire are still missing, King of Lordaeron will stop searching, if they are hiding, they do it very well, but people are affraid, they died somewhere, they could have been ambushed by trolls of Hinterlands or even worse things could have happened.

Lordaeron castle - Five years have passed since end of second war and members of family La Hire are still missing, no one found their family relics (ring and sword) Who knows what could happen to those things. Even stories about family La Hire says the sword is haunted and cause insomnia and madness to someone who dare to wield it if not from La Hire blood line, but no one really have any clues or information about family. King of Lordaeron decided to put mark of Dead family in list of noble families of Lordaeron 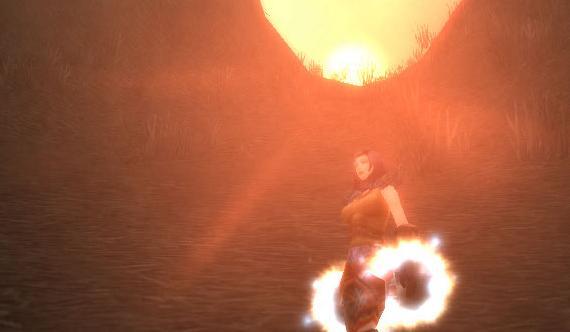 May 6th - Young blood elf girl were spotted from one of watchtowers runing south from North, she looked like runing for her life, scout was sent after her and brought her after few hours to Chapel. What appeared to be blood elf was you human miss fashioned in Sin'Dorei style mumbling something in Thallasian language, even she has white snow hair she looks maximally about 18. Our blood elf crusader took care about her and calmed her down for long hours, now he's talking with her trying to find out what's going on.

May 8th - Crusaders found out that her name is Bayarlalaa, that she fled from Sin'Dorei who grew her up, as it looks since she was baby. She doesn't know how she - human got under care of Sin'Dorei people. We will send our blood elf crusader to Silvermoon city, to find out what is going on. Crusader will go straight tomorrow, we will keep girl here until he returns.

May 9th, morning - Bayarlalaa has left, our scouts spotted few blood knights going south, is there connection? we sent that crusader after those raiders as well as we sent few scouts to look for girl. May 9th, afternoon - our crusader returned with shocking new. Blood knights really were after that girl. They told him she betrayed their people and killed her own step-sister violently, he said he keeps details for himself, that it was cruel and motioned on his neck...

May 10th - Scouts returned with empty hands, girl was gone, we all hope that mad blood knights did not get her. In evening, those Sin'Dorei riders were spotted heading back North slowly, from our guessing they failed. At least one good new.

( Notes in guest book of Inn on Trade District, Stormwind city ) - August 30th - Suspicious Young lady with white hair keeps on renting room in Inn for more than 14 days now, she speaks common, but with strange accent. She looks absolutely depressed and walks like body without soul. She talks to no one except me, while she wants to rent room for another few days. She looks wealthy, but why she lives in Inn? That's mystery for me.

( Notes in guest book of Inn on Trade District, Stormwind city ) - September 12th - White haired young girl is still renting a room from us, this night she brought young Night-Elf girl with herself, it was first time i saw her smiling...

( Diary of Major Samuelson, city guard ) Sep 24th - Today i had to step between two arguing girls in Park, White haired human with strange dialect and purple haired Night Elf... It looked strange for me but it looked like those two girls just broke up or what... those twisted relationships nowadays... Luckily no one was wounded and Girls went separate ways.

( Notes in guest book of Inn on Trade District, Stormwind city ) - September 25th - White haired girl looked more depressed than ever before this day, she paid her room and gave me keys, un-signing herself from further renting.

( Protocols of Battalion - city guards ) December 28th, The contents of this section are false, and have been removed.

( Citizen who don't want to be named ) quote - I saw her, i know her, she is on that picture from newspaper The Quill and Cobblestones - from article State back to fix the state of Stormwind - It's that black haired lady with that shiny sword on her back, She was called "Bayar" by that elf in mail armor over there... I'm no expert but from what i can see on picture, she belongs to a group ( now former group ) of lawful citizens calling themselves "Peace Keepers" It looks like she got wounded recently, look on her right arm, there is really ugly looking cross shaped scar - oww... - end of quote

( Anals of Castle of Stormwind ) January 12th - Young Lady introducing herself as Barbara La Hire, Heiress of La Hire possessions approached in front of his majesty, King Varian Wrynn, demanding to title her as she should be titlet - Countess, she proved her words with her relic sword and seal ring which by books about noble history of Lordaeron seemed to be right. So his majesty king titled her Countess smiling. She quickly told him her vision about some group and asked him for allowing her to form a group which could try to honor Alliance with all it's activities. She was allowed. Since by books her family were nobles living on Lordaeron castle, she could not get much possessions, but at least she was titled as it is her right to be. So from now one, we have another Countess in Stormwind. Countess Barbara La Hire.

Retrieved from "https://scarteleu.fandom.com/wiki/Bayarlalaa?oldid=49029"
Community content is available under CC-BY-SA unless otherwise noted.