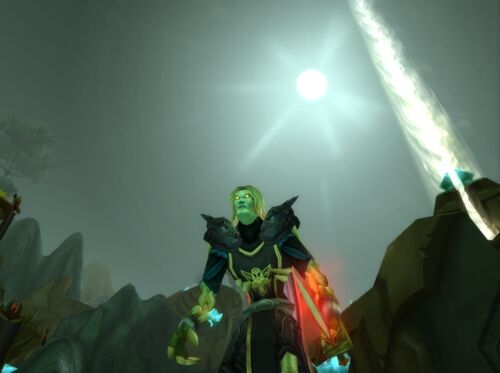 Once Franklin Underwood, since the events that claimed his life and robbed him of his past, he now goes by Caballon.

An imposing figure, armour reclaimed from expeditions in Outland's most dangerous corners, tattered by the extreme conditions of the Netherstorm and scorched from the fel fires of Shadowmoon Valley, Caballon as he is now bears only a small resemblance to the ragged sailor that washed up on the shores of Lordaeron in the months before the Portal was re-opened. He prefers to travel and fight without a helm, as he did in his sailing days, letting the air and the wind soothe and cool, or fuel his rage when in battle. If necessary he will pull a dark hood over his head, hiding all but the dead, glistening orbs that used to be eyes.

Agent of the Forsaken Business Association and thug in the employ of The Villainy; affiliates with the Scryers faction of Blood Elves based in Shattrath City. Also been known to accept contracts from outside sources.

Born as Franklin Underwood, he led the life of a scoundrel. Leaving his home in Stormwind City as a young adult to join the crew of the 'Aglar bo en Aearon' - a rather dilapidated but functional pirate ship.

One of the crew's hauls contained artefacts from the followers of the Lich King, tainted by the undead curse of the Scourge and was responsible for the deaths of them all and the re-birth of some as the undead. Washing up on the shores of Lordaeron, with little memory of his old life, he was brought to the Undercity where he joined the ranks of The Forsaken and was contracted to work for Esme Underwood, neither had any knowledge they were related.

He was part of the force that repelled the invasion of the Burning Legion during the re-opening of the Dark Portal; became a sword for hire amongst the factions in Outland and was embittered, wearied and drained by the un-ending war.

Caballon often returns to the land of Azeroth, easing his aches and worries by drinking on the decks of Booty Bay, watching the sun on the ocean, remembering the smells of the sea and the sounds of the birds.

Up until recently, Caballon could not remember his family. It was one Barnabas C. that came to him during a visit to Booty Bay and produced a picture of the three Underwood brothers, enquiring about the family and talking of past events, that the memories began forming again.

Events that night brought Caballon to Esme, seeking a scrying of the engraved portrait, which ended with the discovery that the two were in fact related, a niece to an uncle, and that both were being played in some plot by the conjurer to blackmail young Esme.

Lattices of scars on his back indicate Caballon suffered through several bouts of corporal punishment before his undeath, probably linked to theft or assault.

After following the rotten stink of his brethren into the depths of The Undercity, Caballon decided to relinquish his old criminal ways and in an attempt to go legit, applied to work for The Forsaken Business Association... though this didn't last long as he once again learned to turn the loss of other's into his own personal gain under the watchful eyes of Esme Underwood and Trauma Blackblood.

Suspected to be responsible for several unrelated deaths, multiple thefts, assaults and racketeering.

Seeking revenge and redemption from the battles raging on the shores of Northrend.

Retrieved from "https://scarteleu.fandom.com/wiki/Caballon?oldid=28096"
Community content is available under CC-BY-SA unless otherwise noted.