Maybe this is me being picky but as a guy that used to run a site that was constantly eating up bandwidth and server space, I wince when I look at Special:UnusedImages.

I've tagged site images with this category for now, but there are a lot of screenshots of characters that are taking up space without cause. I'm just assuming they are old, outdated character pics that people have taken off their pages in favour of newer ones. If this is the case, maybe we could publicise the <gallery> function a bit more. Twould work like so:

This is a guy. 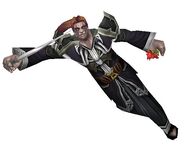 This is the guy when he was possessed.

This is the guy with a sword.
Add a photo to this gallery

That to me seems like a nice way for someone to put a bunch of nice, but non-essential images at the bottom of their character page to give it a bit more flavour. Just a thought.

The crests are confusing me. They were redirection pages to Stop1, which seems to be part of a project started by one of the founders of Wikia but has no relation to anything else on the wiki. That's a mystery in itself but I'm also curious as to what one of the hub site's founders was doing poking around our little den? Anyway, the crests could be put on racial category pages but someone would need to implement that for ten pages in a way that looked nice. (In other words I'll probably end up doing it when I'm bored.)

What does Tarian do when he can't play WoW?: Make templates and categories that will hardly ever be used.

You're right about most of these images just being there wasting space. A lot are indeed outdated. One or two were uploaded for purposes of my own (though still SWC related, of course). As for the crests, they used to be more closely related to the Menu page styles. All Characters has a special banner now, as you can see, but it used to be a bit closer to the banner in RPStories, sporting a different crest. The Stop1 thingy was a little idea I had that never came to anything.

Good time to start going through this stuff.

(The Gallery function looks quite useful. I must compile some more info on this kind of thing on a post in the forums.)

P.S - A new version of Wikia is comming out soon. More info here.

I think we're running that new wiki version as we type! Or at least, the duplicate image check is in, and the special pages page is a lot fancier.

Thanks for clearing the Stop1 stuff up. That really had me confused!

One thing that occured to me was the question of how often to clear out the candidates for deletion. Perhaps consider all marked files on the first day of every month, so long as there has been a timeframe of at least a week for users to protest? Or something similar?

Retrieved from "https://scarteleu.fandom.com/wiki/Category_talk:Candidates_for_Deletion?oldid=25840"
Community content is available under CC-BY-SA unless otherwise noted.