"If you can't get someone to like you, destroy them."

Was originally a Holy Priestess in Stratholme, but strayed from the Light to seek out the Shadow. During this time, she also strayed from chastity and married herself in secret to one Reginald Winthorpe, a Bard known throughout Lordaeron during that time for his great tales and singing voice. Déliana got with child, and was eventually discovered and cast out by the holy Order she once was so proud of. This caused her to delve deeper into the Shadow where she eventually learned of the Realm of Shadows. This drew her to nothing short of madness, and she soon rejected her husband and her son, Ronald. Reginald was forced to raise his son on his own. Déliana allied herself with a cult called the Circle, that worshipped the Shadow and had Necromancy. Years passed, until her son was as old as fourteen. At this time, the Culling of Stratholme commenced, and Déliana was trapped in the Circle's ceremonial chamber as the stairwell caved in due to the house being on fire. She slowly suffocated to death in the smoke-filled cellar. Some time after this point, she was raised as a Scourge zombie, but was later slain again. Her broken body was dumped in the mass graves outside of Brill, where she later awoke anew to Lady Sylvanas' call.

With her recent return to the Shadow Realm, Déliana has regained much of the shadowy Energy she once lost. The first thing she did was to track down and brutally murder her ex-husband Reginald, and now she has set out on an insane crusade against all would-be good people and creatures. Once she regained enough power, she joined the now disbanded Church of Shadows. There she connected to the Shadow completely, and with the help of her twisted faith she worked her way up to being a full time leader of the sect until it's unfortunate disbanding. As the world crumbled around her, with the oncoming Cataclysm and an increasingly disinterest towards the former Church of Shadows, Déliana soon realised that she had nothing left worth achieving in this world, and delved even further into the Dark Arts and Forgotten Shadow. She searched for the path to Ascension, a mythical and seemingly impossible goal. During this time, her old 'aquantances' caught up with her. No longer protected by the Church and Forsaken politics, she was targeted by several people for assassination, her former son being amongst them. Hired to do the job was the Crimson Sun Brigade.

But Déliana knew of their plans, for they had in mistake sent their members to find her first. With her affinity for Shadow magic and now empowered capabilities, she had read their minds and begun preparations. As each day passed, she grew stronger. Less and less of her looked Forsaken, with her skin taking to an almost black tone and her voice becoming hollow and terrifying. Shadows woulds stick to her as she moved, and she begun to fear the light of day. Her unholy prescence could now be felt by those around her, and her Shadowform would suck away the life-force of those touching it. It was happening... But she still needed more time, more knowledge. Attempting to Ascend without proper preparations would most certainly prove fatal.

So one fateful evening, the Crimson Sun Brigade gathered their best fighters, warriors and casters, and proceeded to Déliana's lair, where she had set up in a hidden part of the ruined island fort of Caer Darrow. The battle lasted for several hours, but at last Koránith, leader of the Brigade, managed to bring Déliana to a swift end with his axe. But as Déliana drew her last breath, she realised what she had overlooked for so long. The need to let go of her physical form. And when it withered away and died, she proceeded with Ascending into the Realm of Shadows, leaving behind the foolish mortals and their petty squabbles. It is doubtful she'll ever return, as the business of mortals are beneath her.

Rumours speak of fairly recent events involving secret operations with ties to not only the Crimson Sun Brigade and the Beastmaw Warband, but also sanctions with authorization of the Ebon Blade and Argent Dawn to summon forth the Shadow Ascendant Deliana, and put an end to her mad quest of power. Hearsay speaks of her being suffering it's demise near the site of where she was first slain, Caer Darrow. Forsaken officials of the Forgotten Shadow refuse to comment on any such events, though residents living near or in the Western Plaguelands reported dark skies over the fortress island, with ghastly cloud formations and a strong sense of dread lingering in the air. Individual eyewitnesses tell tales of a large force consisting of Orcs, Blood Elves, Forsaken, Tauren, Trolls and others gathering at Caer Darrow, venturing inside. Shortly following, the island would have been 'shrouded with an impenetrable dark fog' and the sound of screams and fighting would be heard from within. After what would have seemed like hours, a massive purple shockwave was witnessed discharging from the island, clearing the fog around it, and shaking the very foundations of the lands around it. The skies would have opened up and dispersed the dark clouds. Due to the scarcity of the reports however, the truth in the matter may never be discovered.

Déliana as she appeared within the Circle. 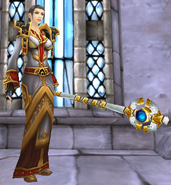 Déliana as a Holy Priestess of Stratholme.
Add a photo to this gallery
Retrieved from "https://scarteleu.fandom.com/wiki/D%C3%A9liana?oldid=59566"
Community content is available under CC-BY-SA unless otherwise noted.