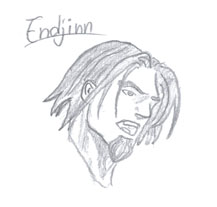 A young, quiet good looking man in his early twenties, he has raven black necklong hair and kind green eyes. Endjinn speaks with a strong Irish accent. He is a battleworn paladin with an old Libram hanging from his belt in a thick chain. He has a slight limp and his armor is old and has been through many battles.

Endjinn is a paladin and newly recruited into the reforming of the Knights Of The Silver Hand.

Endjinn was born in Andorhal. His father was a knight of the silverhand but worked as a blacksmith in Andorhal. Endjinn was tought how to become a blacksmith but he didn't want anything else than be a knight as his father. Endjinn was often scolded when he was young since he was rather mischievous but nothing too serious as his parents loved him. At the age of six, his mother gave birth to a baby sister, they named her Ericka after Annabells mother. Endjinn used to pull pranks on his sister but he was always careful and protected her. At the age of 18 his father set out to fight alongside Lord Uther Lightbringer in the (third) war and he was left to take care of his family. For a period he kept up the work a a blacksmith helping the society of Androhal but in secret he forged himself a blade so he could protect the town from possible attacks. That attack came sooner than he had thought. Within days the scourge attacked andorhal and slaughtered the citizens. Endjinn was by the time out in the woods gathering wood, as he saw the town burning he ran towards his house and found his mother being attacked by one of the beasts of the scourge while protecting her daughter. He grabbed his sword to slay the beast but his mother was badly hurt. as he tried to calm his sister down, his mother rise to stare at him with empty eyes, she lunged at him and he could do nothing but put up his sword and slay his own mother. He took his sister and ran, they soon got ambushed by a group of undead and he told her sister to run, she did as she was told and ran as fast as he could, looking back at Endjinn fighting for his life. Endjinn killed off some of the undead but had to flee. Trying to find his sister, he fainted in the woods nearby in exhaustion. He never found her and eventually ended up in Stormwind.

(not all set up yet)

Disappeared during the Scourge attack on Stormwind

Retrieved from "https://scarteleu.fandom.com/wiki/Endjinn?oldid=33837"
Community content is available under CC-BY-SA unless otherwise noted.