A Sin'dorei of 220 years, Eshteheru is not yet in her prime, yet 110 years after reaching adulthood. Her voice is soft and alluring, her beauty stunning as her lithe and slim body moves with elegance worthy of a former Quel'dorei. Her glowing green eyes are playful, and her lips ever with a wicked smile, which just as quickly can be turned into an angelic or sweet smile, as she chooses.

A cook, albeit she can conjure her own food with knowledge in first aid.

Distant relative (albeit she has no knowledge of it):

(Eshteheru in the background, her two cousins at the front)

During her years reaching adulthood she appeared quite adapt in the ways of the Arcane as is natural for many Quel'dorei, and due to her family's wealth she was schooled only by the best, thus adding to her quite aloof upbringing, thinking herself higher than those of the more common folk. She also learned very quickly that her beauty could just as easily be used as a means for her to get what she wanted, thus having several admireres and would-be courters. Due to some of her tutors of her own gender, she learned how to manipulate the males, how to ensnare them with sweet words and mere gestures, which, obviously, was the greatest tool of the female Quel'dorei wizards to climb higher in the strict hierachy of the High Elven society. Eshteheru appeared a natural.

Yet there was but one thing that even her beauty, honey-coated words and alluring body could not prevent, and she was one of few Quel'dorei to leave Quel'thalas to assist the Humans and their allies against a growing threat: The coming of the Scourge.

Suffice to say, in the ensuing struggle Eshteheru finally came face to face with the deadly reality outside of her beloved home near the now Ghostlands, witnessing with her own eyes Quel'dorei fall in battle. Being the fierce High Elf she was, she cared not for the Human casualties, and shed no tear for them, but lost some of her friends, High Elven females and males alike that she had come to know during her many years of tutelage under the wise Magi of Silvermoon. The attrocities only became worse when she learned of the fall of Quel'thalas, and the slaughter of her people, including learning that her own family had been decimated by the fallen Prince Arthas Menethil and the Scourge that he commanded.

And with the coming of Archimonde the Defiler, the fall of Dalaran, and the wave upon wave of unholy daemons of the Burning Crusade, Eshteheru's heart only grew bitter at the losses.

Regardless, she was not present when Prince Kael'thas rallied what remained of his people, dubbing them the Sin'dorei, Blood Elves, yet she learned of the treachery committed towards the royal heir, when he was imprisoned and sentenced to death. She finally deserted the Human allies that she had come to despise, blaming them for the fall of Quel'thalas.

When finally having reached her beloved home, everything had changed. Silvermoon City was but a pale reflection of the beauty it had once been, and her home a smoldering ruin. Yet all these sorrows made her become self-preserving, remembering what she had learned, and used her charms, beauty and melodious voice to gain favour with those with more power. And despite outright despising the Forsaken, the Orcs and Trolls, and thinking the Tauren to be little more than primitive bullmen, she can just as easily switch to the sweet alluring Sin'dorei that she is, being no exception to the burning thirst for magic.

Her sorrows are therefore buried deep beneath well versed training in the manipulative ways, ever wearing a mask of confidence, seductive beauty, and charming smiles and gestures - Silmarwyn apparently being the only one capable of reminding her of her painful past while away from Quel'thalas.

Traits: Arrogant, sly, charming, brooding and sharp tongue. She can easily change from being nice to cruel.

She shows little patience with people whom she finds of no use, but will not stop flattering those who appear to have something useful for her.

Her words can be charming or full of poison, varying her words from either subtle ridicule to outright hateful.

There is no love lost between Eshteheru and the other races of the Horde. For her, the only race worthy of respect is her own. The Alliance is something she despises, and as a result tolerates her people's choice of joining the Horde, but is quick to spite. Nevertheless even her honey-coated words can find their way into the ears of powerful Forsaken, Trolls, Orcs and Tauren, should she see it fit, yet everything with an agenda.

As for her kin she adores Jeselith and is quick to throw a venomous remark at Silmarwyn, who returns the favour with equal measure. By the same reason, her mild (or great) interest in Jeselith is one of her tools to spite the ever protecting sibling, Silmarwyn. As for Rag'Thas she appears patronising, almost belittling, thinking him a fool for not using his position as a noble to his own ends - something Eshteheru revels in.

Her loyalty to her kin is fierce, regardless.

After finding her cousins near Silvermoon, Eshteheru was holding herself close to them, ever annoying Silmarwyn when she can, thus showing no intention of forgetting their old rivalry. Nevertheless, she appeared to acknowledge the need to strengthen House Darkstorm in any way possible, though marriage seems far from her mind.

She currently resides in Silvermoon - or at least in the part rebuilt, albeit abandoned and alone as both Jeselith and Silmarwyn have disappeared without a word, shortly followed by all the servants. She can sometimes be seen in Silvermoon City, walking alone and with a less than happy expression on her face. 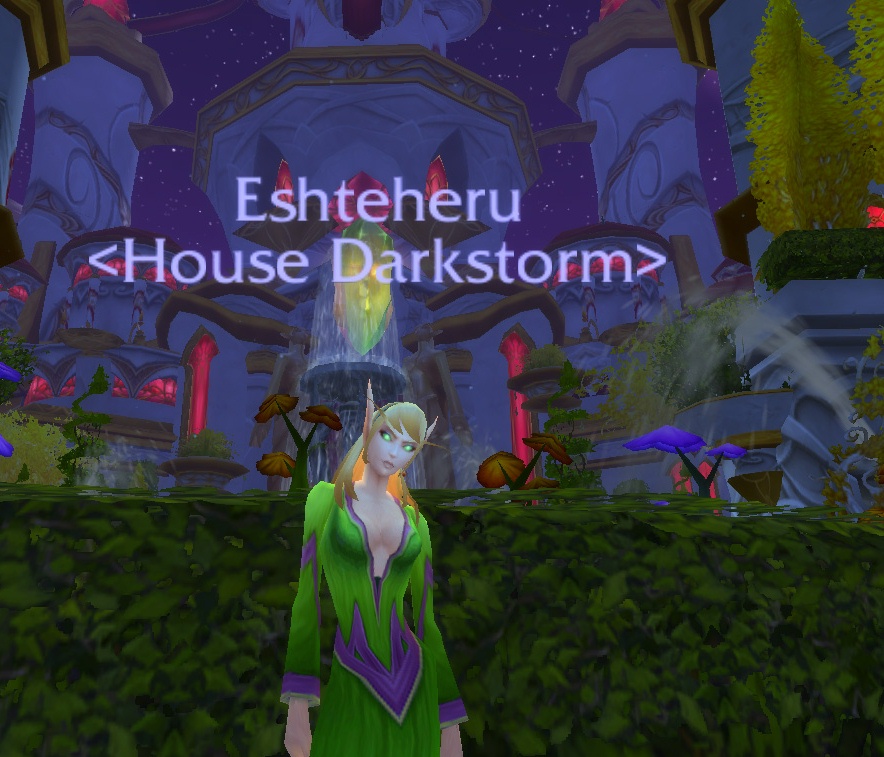 Retrieved from "https://scarteleu.fandom.com/wiki/Eshteheru?oldid=23681"
Community content is available under CC-BY-SA unless otherwise noted.