This adult kal'dorei male stands slightly taller than most of his kind, with a firmly muscled yet agile build, the scars placed on the for-now visible parts of his body, such as his broad shoulders, thick biceps and chest, makes him look experienced and giving him an illusion making many believe he is older than he truly is. He usually wears a black blindfold to hide his mutilated eyesockets.

There are not just scars covering his body, His body is covered by dark runes that flare up into bright fel green in combat, though the upper parts of the runes would be hard to notice unless his long dark-blue hair, which mostly hangs down loosely to cover his back, is grabbed by the wind. 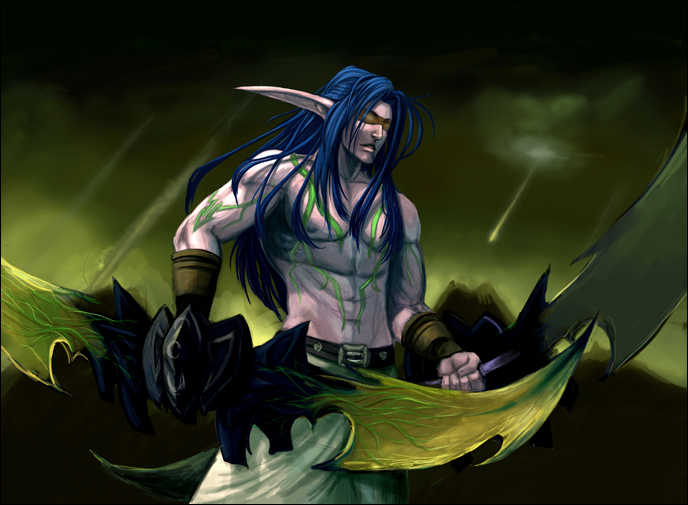 Hazadur is very serious when it comes to his fighting against the legion, as are most demon hunters.

Hazadur is kind and sometimes quite childish (Also quite the idiot when it comes to simple stuff, as he is not used to normal life), when someone is in need of help, he will do his best to help the person. In his own way he is trying to make people understand that his kind, the Demon Hunters, are not all corrupted and evil, and that they are trustworthy.

He calls himself part of the new generation of Demon Hunters. In his mind, the older ones think that the legion can be destroyed by them alone, but Hazadur knows that this is not possible. Others are needed, like the mortal races, thus he wishes to gain their trust. So that when the time comes, they can trust each other at the front against the legion.

Hazadur was born somewhere in Ashenvale with only his father. His mother died shortly after giving birth to him and his brother and sister had moved on their own already. His father died when Hazadur was only five, and he was forced to live on his own. Luckily his father had taught him a lot about surviving alone in the wilds. At the age of six, he was found in the wilds by a Demon Hunter. This demon hunter took him to be his apprentice and trained him. Hazadur was trained for several years, untill he was thrown into night elven jail, that located in a cave system inside Mount Hyjal, due to a misunderstanding.

Hazadur spent 450 years in this jail until he escaped when an infernal crashed down and destroyed the roof of the cave, collapsing it almost completely. Hazadur was one of the few survivors. It took him days to get out from the ruins, and by the time he got out the battle of Mount Hyjal was already over.

After these events Hazadur wandered around Kalimdor, slaying demons and helping those who accepted his help, after a few years he got himself to the Eastern Kingdoms. After a some time in the Easter Kingdoms he met Kalanthe Wintermoon, and took his final Demon Hunter ritual a few years later, by absorbing and sealing the essence of the shivarra Deja. He then continued his demon slaying in the Eastern Kingdoms, mostly in the Blasted Lands before the gate to Outland was opened.

After the gate opened, he has mostly been helping the alliance to hold the Dark Portal on the Outland side, by doing assassinations on the demon commanders of the legion, and just simple clean ups.

Resisting Arrest. Did this due to the guards trying to arrest him for being what he is.

Those attuned to the light (and demonic powers, Warlocks) might be able to sense a strong, though contained, demonic presence inside Hazadur.

Spectral Sight (Enchanced Sight): Spectral sight is a Demon hunter spell where they are ritually blinded so that they are enabled to see demons and undead with greater clarity and are also able to sense everyone else around them which is indeed a very useful skill especially in combat.

Power Drain: Demon hunters can drain demonic and fel energy to fuel their own powers. Channeled.

Enchant Weapon: Hazadur can channel the chaos energy within him into a melee weapon to increase its powers or engulf the weapons in flames which Hazadur himself usually uses.

Immolation: Demon hunters have shown the ability to cover their bodies in a shell of flame, Hazadur is one of those who are able to do this. The downside of this ability is that it drains the users energy and needs concentration, making it harder to keep the shell up and engage in melee combat.

Agility and Speed: Over the years Hazadur has trained mostly in speed and agility, able to dodge and move at astonishing speed. He is able to boost his speed for a short while by drawing the demonic powers of what is sealed inside him. Though he is unable to control it well, and usually will just crash into a wall.This is why he usually sticks to slightly 'slower' movement.

Weapon Specialization: Hazadur has trained himself to fight with several different weapons, he prefers faster weapons which he can use to the best with his speed. Usually useing glaives or swords.

Mana Burn: Hazadur channels the chaos energy within him and launches it towards the opponent. It burns mana from the enemy and causes minor chaos damage, ignoreing any armor. Casted.

Demonic Regeneration: Hazadur is able to recover faster from non-fatal wounds due to the demon whose essence he took, Deja. He is able to tap into her essence to heal his wounds and even replenish his strength and power. Downside of this regeneration is that the more he taps into her energies, the more Hazadur's 'spells' (Immolation, Mana Burn, Power Drain) damage and effects are weakened. Also his speed and strength will go down slightly as he can no longer draw power from the demonic essence.

Partial Metamorphosis: Hazadur is able to channel demonic energies into a portion of his body to force it to Metamorphose. Usually he uses this to his legs for a dramastic boost of speed for a few seconds or an arm for strength in combat.

Currently he is unable to perform a full metamorphosis, afraid that at his current strength he would only lose control of himself.

Wandering, not seen by anyone for some time.

Retrieved from "https://scarteleu.fandom.com/wiki/Hazadur?oldid=59671"
Community content is available under CC-BY-SA unless otherwise noted.