Because of their noble blood the House of Wheeler had great influence in the city of Dalaran. Headed by Counts and Countesses the first known record is of a Count Malfrik Wheeler forming settlements in the forest. The first being the hamlet of Ambermill, which was used by the more wealthy mages of Dalaran, wishing to escape from the crowded city. Possible belief that Malfrik chose this area for a powerful ley node resided beneath, wishing himself to tap into this power, such claims have never been proven.

For over many generations the Wheeler family produced many influential teachers, diplomats and warriors. The last of the noble line was an Archmage named Count Malory Wheeler who fell during the Scourge onslaught. With no living descendents The House of Wheeler fell to ruin, their estate pillaged by greedy peasants and disgusting Undead.

After the Scourge onslaught and fall of Dalaran and Lordereon, the peoples of Silverpine forgot the once proud family of Wheeler. However, rumors began to spread that an elderly gentleman had been seen asking questions of the family around local Inns. It seems that the late Malory Wheeler had a son by the name of Nathaniel believed to have been killed by a Troll raid some sixty years earlier. It had seemed that this gentleman has claimed Countship of Ambermill. After several months of legal proceedings, it was unanimously agreed that the gentleman was indeed the heir to the Countship.

Nathaniel’s first task, as Count was to reestablish the ownership of the Wheeler estate in Ambermill. Sifting through the rubble and debris Nathaniel searched for valuable heirlooms not yet pillaged by the peasants. The first was the Wheeler crest which he had restored, also found was the legendary sword Icesteel, passed down over many generations. He then began making arrangements to search for any possible relatives that may have escaped the Scourge onslaught. His only known living relative would be his granddaughter Debrina, heiress to the Wheeler house.

Since Nathaniel has continued aiding the restoration of the Ambermill estate, as well as purchasing a new mansion in Stormwind City due to his busy schedule of attending the Stormwind Assembly. Nathaniel continues his search for other heirlooms lost in the Scourge assault and any possible distant relatives that may still live.

After Nathanials death, his grandaughter, Debrina, took the title as Countess. Although it was his son, Kilrod, who was the rightful heir, it was agreed upon the Dalaran authorities that his claim would be void due to his involvment of the Sin'Dorei attack on Ambermill. 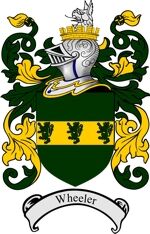 Little is known of its origins but it depicts the family colours of green and gold. It shows three lions indicating royal relations and a helm which shows the family were powerful.

Countess Debrina Arnatuile Wheeler: Current head of the Wheeler house and Countess of Southern Silverpine. The title was bestowed upon her after her grandfathers death due Kilrod, who was the rightful heir, sacraficing his claim after treason for attacking the town of Ambermill.

Count Nathaniel Telrunya Wheeler: Late Count of Southern Silverpine. Reinstated the Wheeler family's ownership of their estate and assets after his fathers "death"

Sir Malory Wheeler: Late Count of the Wheeler estate, felled during the Scourge onslaught. Currently seves the Dark Lady as a Knight and Commander of the Forsaken forces.

Kilrod Redstar Wheeler: Half Elf, son of Nathaniel and Arnatuile. All claims of becoming heir and taking the title are void due to treason after partacking an attack on the town of Ambermill. Currently living in Silvermoon.

House Wheeler is not a guild but a possible community could be established, if anybody has any interest in becoming a member whisper Telrunya in game

Retrieved from "https://scarteleu.fandom.com/wiki/House_Wheeler?oldid=57075"
Community content is available under CC-BY-SA unless otherwise noted.