The Lordaeron Renewal Movement (LRM for short), lead by Lord Allantrius Greendale has a simple aim: To drive the Forsaken out of the lands of Lordaeron, and return it to its former glory. It also fights the scourge when it is needed, though tends to steer away from interfering with the work of the Argent Crusade.

Also fights mercenary contracts when in need of money or another bonus, and helps its allies on occassions if it is deemed appropriate to do so. 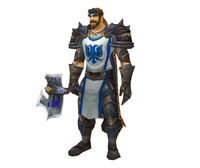 Add a photo to this gallery

(Summarised very briefly) Lord Greendale arrived in Stormwind a year ago, around eleven years after the fall of Lordaeron. He then, using the vast inheritence left by his father, set about calling for fellow refugees to join up, to plan for action in the north. In time, they began to gather momentum, and set about forming a proper military organisation to fight against the Forsaken. Initially, Lord Greendale handed power over the military, rather contraversially, to the first to join the cause, Lyam Creed (The controversy being he was a death knight) and power over finances to a Nicholas Clidon, but after a departure by Lyam for personal reasons, and a betrayal followed by death, of Nicholas, Lord Greendale appointed himself as absolute commander of economic and military sides of the force.

They are now fighting in Silverpine and Hillsbrad, and fight for thier allies elsewhere if they think it necessary. They have been in the struggle for now almost a year, and a Military advisory council, comprised of all at Lieutenant and higher, has evolved over time, giving greater voice to officers and relieving the strain of absolute power from Lord Greendale.

A "White Guard" division was also formed after the Silverpine operation to keep order and code within the ranks, and acts as a general force against anything the order sees as wicked and evil, whilst acting as bodyguards for the officers and nobles of the order.

They have good business relations with GNOME and The Scorched Oath, as well as The Society of Arcanists.

The leader of the force is known as the Commander, who sits at the head of a council of officers, who are all ranked lieutenant and above, named the Military advisory council. Anything can be done without council support, it is just frowned heavily upon.

Then there is the "Major" (Limited to two at any given time) who has almost the same amount of power as the commander, but needs to report all of their doings to the Commander and the council weekly.

Captains command all underneath them, but in what direction their commands go are taken by a higher authority.

Lieutenants, primarily are used to lead sections of the unit on various missions, and on occasions oversee the works of minor work such as bureaucracy and recruitment, and make sure everything runs smoothly.

Basic soldiers do not generally have much power over each other, unless they have been granted it in special circumstances by a higher authority.

The council and how it operatesEdit

From lieutenant and above, members have a seat in the military advisory council, presided over by the Commander, that meets normally once or twice a week. The council speaker, normally a sergeant, announces items on the agenda for the council to disscuss, these can be diplomatic missions, ideas for financial gains, promotions, demotions, structrual changes or plans for future military moves. After disscussion, the item is voted upon, and whichever outcome is normally taken, and if a draw comes, the votes of the highest ranks are counted as more. If a soldier wishes to present a case for the council, they can request an audience with them to present an idea or case.

Upon starting at recruit, in order to advance to private, and become a full time member of the order, one must pass a basic combat trial, overseen by soemone sergeant of higher. From private, promotions will be judged on the following criteria.

The Renewal Movement is currently based in Fenris Keep, Silverpine, fighting the war against the Forsaken in the lands on the shores of Lordamere lake.

Dead Or Missing Soldiers And CitizensEdit

Retrieved from "https://scarteleu.fandom.com/wiki/Kingdom_Of_Lordaeron?oldid=58470"
Community content is available under CC-BY-SA unless otherwise noted.