Standing upright with a military posture, this dark skinned woman clearly stands out from the average Stormwind citizen. She has reached the peak of her physical strength, being mid-twenties, her exact age impossible to pinpoint due to extensive and viscious scarring across her face, neck and shoulders. One particularly dark pink scar slashes diagonally right across her cheek, it seems to have been inexpertly sewn together leaving an ugly mark. Her eyes burn with the cold blue flame of vengeance.

Were it not for the feminine rounding of her hips and breasts, she would be easily mistaken for a man. She is very muscular, with broad shoulders, well defined arms, and thick thighs. Her stomach ripples with muscles, the skin blotched and scared and puckered from fatal shadowbolt scars. Her heavy armor is free from rust, well cared for, either by Louise or some servant. It clanks with Ebon Blade medals from the Icecrown Citadel assault. Around her neck is strung a collection of severed finger bones. She is seldom seen without her plate or at least mail armor, and carrying a hefty sword or axe.

Occasional mercenary/adventurer. Some work for the Ebon Blade.

Young Louise Cook joined the Scarlet Mission to Stormwind following a dream vision [1] and was promoted to Missionary despite a horrible temper. ((See: Louise's Temper.)) Louise spent some time questioning the beliefs of the Scarlet Crusade, rebelling against their rules, and beginning a secret relationship with Hejin. She took up smoking a pipe for a while. After a period of training in Tyr's Hand and a battle against undead in Andorhal, Louise married Hejin of Tirisfal. Following the death of their daughter Heather, Louise's traumatised mind broke. She helped her mother to sell cat-meat in the city of Stormwind. During this time Louise's mind slipped into insanity, losing her memory, seeing things, and becoming over anxious. She began a very brief affair with Kien and divorced Hejin.

Taking leave of absence from expedition duty to Outland, Louise gave birth to a boy, who she named 'Arthas' after the golden prince she had hero-worshiped as a child. She refused to name his father. Louise contacted the cultists who alleged her ex-husband was captive and tortured by them, and bargained with them for his release. Hopeful for reconciliation with Hejin, she travelled to Shadowmoon Valley and met with others also hunting Ashana from the cult.

Alone on the top of a volcano Ashana taunted Louise, saying she had killed Hejin for fun, trapping his soul forever in torture in the Black Book. Louise and Ashana fought, she managed to drive her sword into Ashana, but was wounded fatally, her shoulder pierced by a staff and her torso blown open from searing shadowbolts. Suffering horrific wounds, Louise still managed to free from Ashana the gem containing Blueleaff's soul, which was found safe in her hands after Louise died. She died a prolonged and agonising death, cursed to make the suffering worse.

Louise's body was taken from its grave in Elwynn and soul-lessly resurrected into the service of the Lich King as a Death Knight. Her spirit wandered Stormwind, confused and lost, until an expedition to Naxxramas was able to join her soul and risen body together. Together with the other rebel Death Knights, Louise took a suicide pact, but was too cowardly to fulfil her vow. (see Dreaming of death) Entering Stormwind, Louise sought out the investigator Ibelin. He helped her relocate her son, with whom she now lives in upstairs rooms in a house in the canal district. Louise briefly rekindled her romance with Kien until he fell ill. Louise pushed aside her hopes for romance and concentrated on her work and her son.

Louise has no criminal record. Although she has a bad temper, she only lets it out in the company of her closest friends.

She has spent the last months working for the Ashen Verdict helping break open Icecrown Citadel and help provision the gathered army at the northern glacier. When she is seen in Stormwind, she is usually, angry, weary, or both. She has adopted the Death Knight name "Louise Vendetta".

((None of the information found in the diary can be used in-character, unless your character has direct first-hand knowledge of the event/s. )) 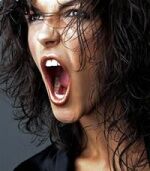 Lou in a temper.

Young Louise
Add a photo to this gallery
Retrieved from "https://scarteleu.fandom.com/wiki/Louise?oldid=59279"
Community content is available under CC-BY-SA unless otherwise noted.