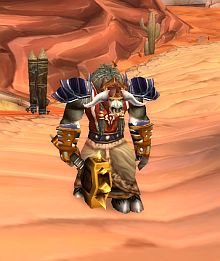 Nyír got his name after his pale fur and white horns. He is a short and stumpy tauren male, not resembling to the Birch in shape at all, but his parents couldn't see it in advance ;)

Former member of the Tears of Blood

He has a natural affection the herbs and ores, the Earth Mother's gifts. Recently he quited mining for he focused on the art of alchemy.

Bibor, his wife. His parents had been killed by the centaurs.

For a long time after mastering the druid's arts he was afraid to shift into animal forms. He heard legends about druids stuck in animal forms, got their souls twisted and leaking away day by day. Years later he dared to take the form of the dire bear to protect his only family, his wife.

Retrieved from "https://scarteleu.fandom.com/wiki/Ny%C3%ADr?oldid=14209"
Community content is available under CC-BY-SA unless otherwise noted.