Elder Mathias Rothbane Ph.D, Honoured citizen of the Forsaken and Sergeant of the Horde.

Mathias is old.... very, very old, in fact to look at him you would guess such things. His skin hangs off his hands and feet, his jaw is held on by staples, to be honest, you would think even the wind would turn him into a pile of skin and bones. But for some strange reason he is still here. He tries to get robes that cover him up, but again fate says, any tailor that makes him clothes seem to cut them, shred them and leave big holes in them.

If Mathias isn’t trying to sell unused graves, crypts or coffins. He can usual be heard advertising his “Pet Care” over the trade channels, or many of his other trades. Most common sales pitches: 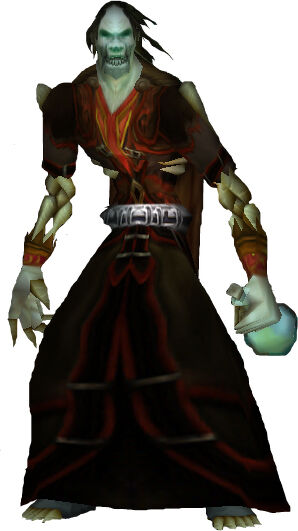 “Uncle Rothbanes pet care workshop, We will look after your pet Human, Elf, Dwarf or Gnome for only 5 gold an hour, we can also bring them back black and blue *please note we will not be held responsible for the death of your pet. In fact that is extra*”

“Elder Rothbanes Taxi company, why pay good money on getting that bat or other form of transport just for the handler to stand there and not spend it, just send your 1 gold piece to Elder Rothbane and he will teleport himself far away from you”

“Looking for that special place so you and your family can grow together? Looking for that little place, with enough room for your pet gnome?. But having troubles with interest rates? Then why not call on Elders the Homes people, we have many a crypt coffin or morgue for your taste. *every 3rd customer will receive a free can of insect repellent*“

And after all of that Mathias has always got first aid under his belt.

Mathias has never spoken to anyone about his family.

“If you really want to know this, you would have to speak to him in character, bear in mind it might change from person to person, as he likes to keep some secrecy about what he has done, doing or going to do”

Mathias would be wanted by many of the alliance law enforcement agencies, for crimes against life kind. But up until now, he has no criminal record.

Mathias, is not one to beat around the bush, if anyone was to ask him what he was doing he would of course tell them. Not necessarily the truth but he would tell them something.

Trying to die, but the spirit healer really doesn’t like him. If he is not trying to end his miserable existence, he can often be found, concocting more plagues, trying to end the lives of humans, elf’s, etc, etc...

Also spends as much time as he can to aid the war effort, participating in raids.

Retrieved from "https://scarteleu.fandom.com/wiki/Rothbane?oldid=19946"
Community content is available under CC-BY-SA unless otherwise noted.