These D&D-inspired in-character disciplines were created as part of The Dark Embrace's roleplay. They played a role in the guild's roleplay, but aren't supported as actual classes in WoW or the Warcraft RPG. They're listed here to keep the players' guild lore intact. 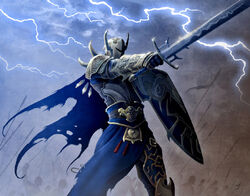 Shadow Knights are Paladins who have forsaken the Path of the Light embracing the Shadow to follow the religion of the Shadow.

Shadow Knights are not created by mistake nor are they changed easily as their choice to fall from the Light is a conscience decision, and are judged by the Shadow before they enter its service; all Shadow Knights know the price of the corruption and the path that they walk, some turning to practice the Dark Arcane to supplement their own corrupted powers.

To supplement some of their corrupted powers, or those lost when they withdrew from the Light, the Shadow Knight often seeks out a Master or Mistress who are well versed in the Dark Arcane or Necromancy.

There is already one case of one such binding in existence; where in the Shadow Knight can command an undead minion to do their bidding, having learned a minor part of Necromancy, but this is not common as it edges them closer to the Lich King if not properly controlled.

The ritual involving the true transformation into a full Shadow Knight is shrouded in mystery and details of it cannot be confirmed.

They often carry a blade that is similar to the Runed Blade of the Death Knight, which emits the same eerie blue glow and sometimes can be seen riding black steeds.

Shadow Knight are not to be confused with Death Knights who serve the Lich King and the Scourge as they are similar, but comparably different to each other.

Shadow Knights are not tolerated or revered by the Church of the Light, often being hunted by the Knights of the Church being seen as abominations.

Most Shadow Knights are of an evil Alignment.

Spellswords are sorcerers skilled with light close combat weapons. They are fast in combat and spell casting, mixing the two together when in close quarters fighting. Spellswords generally tend to focus on more destructive magics such as fire spells, also they use magic to enchant their weapons such as setting it alight with magical fire. They also weave powerful illusion spells to make up for the lack of armor necessary to successfully cast magic.

Spellswords fight with short or long blades, always one-handed weapons, leaving one free arm to finish the spellcasting of the prepared spells, or to release devastating runes upon them enemies. Their melee prowess, however, is mostly defensive, since their magic can be more devastating than the most sharpened edge.

The spellsword is defined by concentration and focus above any other trait, be it physical or magical. This is required so they can chant power words adequately, at the same time they are engaged in melée, for magic allows not the slightest error.

Familiars are a common and useful choice for spellswords, specially those creatures prepared for battle, so they can distract the enemy in key moments of the encounter. Demons and elementals find themselves amongst the most popular choices.

Retrieved from "https://scarteleu.fandom.com/wiki/TDE_Classes?oldid=57111"
Community content is available under CC-BY-SA unless otherwise noted.