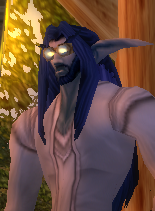 He seems unremarkable. A strong, pleasant smell of cooking seems to follow him, but also a waft of Goldshire's cheapest brew. A pair of goggles fail to retain the golden glow of his eyes, causing the light to shine intensely in certain directions. He stands restlessly, shifting from one foot to the other at regular intervals.

Druid will notice that he does not appear to have a connection to the forces of nature as most Night Elves do.

Mercenary, mainly for the various militia and military groups in the kingdom of Stormwind, such as the People's Militia in Westfall and the Night Watch in Darkshire.

Tarian grew up as the only son to humble parents in Ashenvale around the time that the Humans first encountered the Orcs. His parents hoped for him to mature into a powerful Druid, encouraging him to commune with the spirits of nature whenever possible, but Tarian was not interested. Reading through the chronicles of the War of the Ancients, it seemed to him that Illidan was a much more powerful man than Malfurion. Although he still respected the will of nature, the young boy discarded his fledgling Druidic powers and dreamt of becoming a Demon Hunter.

Over the years, he built himself some renown as a skilled tracker and marksman, despite his young age. To his pleasant surprise, it led to him receiving a fair amount of attention from the young women of Ashenvale. When he discovered that a local girl was carrying his child, they quickly married and settled down together. At first, Tarian pined for the life of a bachelor, but all regrets were dashed from his mind when he first set eyes on his wife cradling his new-born daughter for the first time. They lived happily, and Tarian hoped that nothing would ever change.

Then the Orcs came. And on their heels, the Burning Legion and the undead Scourge. When Tarian, now a mature and respected ranger of Ashenvale, heard the news of invasion, he immediately joined the military forces of the Night Elves, under the command of Malfurion Stormrage. Tarian quickly rose through the ranks of the coalition, eventually being placed in command of a small force of Night Elves, Humans and Orcs who were tasked with defending the town of Astranaar in Ashenvale. Fighting for days, they were able to keep the town safe from destruction by the encroaching enemy. Eventually, the war came to a peak as Archimonde started on the journey to Hyjal. Malfurion ordered all of the forces at Kalimdor's defence to the summit of the mountain to make a last stand. As Tarian and his men prepared to travel north, they heard word that Tarian's home town was under attack from the Scourge. When they arrived to defend the village, they found it burnt to the ground, all the inhabitants slaughtered, with some already raised as undead. While his forces cleared up the enemy presence in the region, Tarian tore through the ruins of his home in search of his wife and child. When he found his wife, her spirit had already been ripped from her and enslaved to the Scourge as a hate-filled banshee, whom he was forced to slay to keep his life. Wrought with grief, all he could do was weep over his wife's corpse. His parents had also been killed, but he was able to cremate their bodies and mourn peacefully before they could be raised. He never found his child's body, presuming it reduced to ashes in the fires that raged throughout his home.

Tarian swore revenge on the Scourge that had ravaged his home. He and what remained of his men followed the tracks that the Undead had left, and came upon their camp and the Necromancer that led them. The resulting battle lasted hours, but victory was claimed by Tarian, who dealt the Necromancer the finishing blow - an arrow through the skull. He was the only one to walk away alive that night.

Malfurion was furious that Tarian had disobeyed his direct order to defend Hyjal. Although the Legion had been defeated, the Druid decided to make an example of Tarian, to show that all who did not follow the will of the Druids were not welcome in the Night Elven lands. Tarian was stripped of his rank and banished. As he was thrown over the border of Ashenvale, Malfurion himself broke the link between Tarian and the spirits of nature, severely reducing his natural strength.

The humans, not understanding Malfurion's annoyance with the hunter, took pity upon him and invited him aboard a ship bound home for the Eastern Kingdoms. With nothing left for him in Kalimdor, Tarian swiftly agreed.

It has now been five years since Tarian came to the Kingdoms of Men and Dwarves, and is now living in the human settlement of Goldshire.

A number of months ago, Tarian had a chance encounter with a Night Elven woman called Arilien. Having lost her memory, Tarian found her childlike fascination with the world endearing and set about helping her regain her memory, and reconcile with a man named Ninx.

Ninx was the first person she had seen after losing her memory, and he, having been seeking her favour for some time, persuaded her that they were in a relationship. When Arilien tried to kiss him, however, he was plagued by guilt and stormed off, leaving her thinking she had done something wrong. Upset, she found her way to the Goldshire tavern, in which she encountered Tarian. To show him what she had done to upset Ninx, she kissed him, and from that moment romantic feelings started to develop between them. After retracing Arilien's steps around Elwynn Forest, the two returned to the inn to find Ninx drinking there. Leaving Arilien and Ninx to make up, Tarian slipped away quietly into the night.

Weeks later, he had already started a relationship with another woman. During his absence, Arilien's feelings for him had grown while his had waned. Confronting him, she confessed her feelings but Tarian was forced to reject her. Distraught, she sought out Ninx, who blamed Tarian for upsetting Arilien and causing their relationship to break down. For the first time, they stood face to face.

Ninx, with blades drawn, was ready to confiscate most of Tarian's vital organs, but the latter was able to use his quick wit and sense of humour to turn the fight into a fishing contest, which he promptly won. In a show of good sportsmanship, the two shook hands and Ninx removed his face mask to congratulate the winner. To the shock of Tarian and the assembled crowd, the face revealed was almost identical to Tarian's.

Using a spell from the strange black book Tarian owns (see possessions section) he and a pair of druids were able to trace Ninx's link to nature back to his birth, revealing that he and Tarian were in fact twins, separated and given to adoptive parents, both for unknown reasons.

Ninx subsequently took the 'Lunarblade' name in honour of the discovery.

The loss of his connection to the forces of nature has had quite an adverse effect on him. He has begun to study engineering from the Gnomes in Stormwind and Ironforge, and is often seen with a Dwarven musket rather than the traditional Elven bow.

A small black book that Tarian constantly carries around in his back pocket. Given to him by his adoptive father, and his grandfather before him. It's known to include a number of lesser-known druid spells, including:

Tarian is hardly ever seen without his trademark goggles. Over the years, he has given several different reasons for wearing them, including:

Investigation by friends seems to point towards the third explanation being the most likely.

Retrieved from "https://scarteleu.fandom.com/wiki/Tarian?oldid=14810"
Community content is available under CC-BY-SA unless otherwise noted.