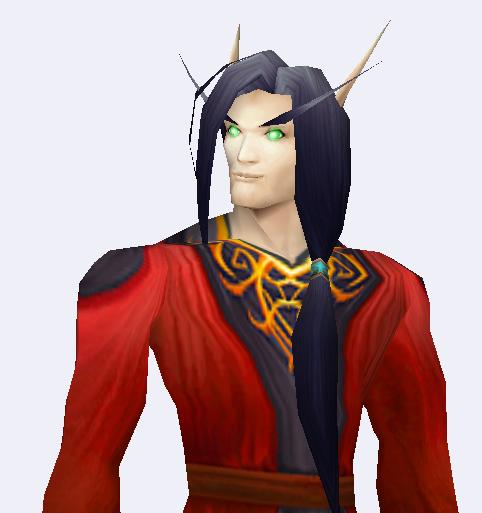 Thalios is a Blood elf of average height, however he is very good looking, even by blood elf standards. He wears his long black hair across the side of his face, and over his shoulder, tied at the end. He is always seen wearing his apprentice robes and his reading glasses while hauling his massive anmount of books around with him.

all deceased during the scourge invasion. He looks at Kalidia as a older sister though.

Thalios was born on the exact same day as five other blood elf children, Kalidia, Jin'reia, Serradomin, Perrylin and forcysto. These six children were believed to have a higher level of arcane and demonic power, so an experiment was devised to test these powers. Once all six children were aged fifteen they were sent into an island that had been set up for this trial. All six children had to survive for one year on this island without any knowledge of there arcane and demonic powers. These six children had to survive against raptors, naga, panthers and undead. At the end of this trial certain highmages and quel'thalasian rangers were sent into discover the fate of these six children. Only three of them had survived for that horrific year, Kalidia, Thalios and Forcysto. Kalidia and Thalios had been found huddled together peacefully sleeping, after being found it was discovered that they had no injuries or any other problems, they were extremely fit but it was also discovered that they had no memory of what had happened. Forcysto on the other hand had been found clutching a naga trident surrounded by dozens of skeletons and half eaten corpses.Forcysto had become insane with rage and demonic power, because of this he had begun to have violent outbursts and attacked almost anyone, eventually he had gotten out of control and had murdered a full village of elves and devoured there souls, it took four of the most poweful highmages at the time to stop him. For the past 83 years Thalios has been training alongside Kalidia under the guidence of Instructor Antheol, in the Eversong woods, in the arcane and demonic teachings.

His family where all killed during the scourge invasion.

Thalios himself has commited no real crimes at all, he just gets dragged into whatever Kalidia has got herself into.

Thalios has a very friendly personality, infact, he has a unusually friendly personality, he makes Elizabetha look like archimonde, yes, he's THAT friendly. However, he is quite oblivious to the happenings around him, and tends to doze off alot or bury his nose into one of his multiple books on lore and information. He is very intelligent, he just lacks a great deal of common sense.

Retrieved from "https://scarteleu.fandom.com/wiki/Thalios?oldid=14983"
Community content is available under CC-BY-SA unless otherwise noted.