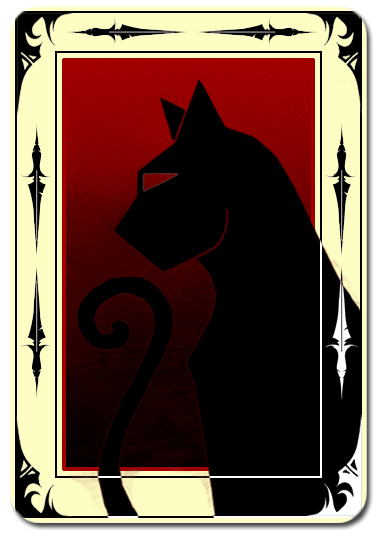 After a spree of seemingly random murders in and around Stormwind, one thing and one thing only linked them together. Upon each body a card was found displaying a sillohette of a black cat, similar to that of a tarot many people jumped to outrageous conclusions. With the first finger of blame falling to the many religious sects and cults that operate from within the city it slowly started to emerge that whomever was behind The Black Cat murders was a lone operative, working alone, killing for a purpose only they know of.

Speculation was rife amongst the criminal underground, with at least one person from each major gang wanting to take the credit for the murders. As each was proven by their peers to have nothing to do with the deaths, a cold finger of blame fell upon Kinley MacFarlane and has since shifted. However, with little to no evidence placing him at either of the crime scenes Kinley still walks a free man. The speculation continues and Kinley's name is brought up frequently within circles out of ears reach of the State guard.

Wether or not Kinley was behind the killings is still to be proven.

Retrieved from "https://scarteleu.fandom.com/wiki/The_Black_Cat?oldid=56929"
Community content is available under CC-BY-SA unless otherwise noted.