Umbert was a massive, dominating being, his body was encased in thick dark red armor. His horned helmet enshrouded his eyes and mouth in shadow. His mere appearance struck fear into all but the bravest of warriors.

His voice was dark, deep and had a strange echo to it.

Enforcer of the Dark Embrace

Very little was known of Umbert's past, only that he killed his mother by pushing her down a flight of stone stairs.

The Redstone Clan is an ancient dwarven bloodline. Unlike their mountain-dwelling bretheren, they are nomadic, usually leaving the clan's appalling lifestyle to make a name for themselves as adventurers and warriors. Occasions when records of Redstones in inn logbooks or on weapon receipts are found are few and far between.

Since the Stormwind Night Watch was disbanded, all records of Umbert's criminal records had been lost.

Umbert was titanically strong, fast and was moderately intelligent, but still far more intelligent than he was as a mortal berzerker. His armor was extremely thick, and his right gauntlet was merely solid steel, as he tore off his claw and bled to death, as was a part of the ritual to make him the undead monstrosity he became.

Dead. Betrayed by Azeera, who branded him as a traitor to the Embrace, and destroyed his phylactery in front of him, releasing his soul into the Twisting Nether. Now Umbert suffers an enternity of damnation, as he is tortured in death for his betrayal of the Dwarven people.

I originally thought of the image of Umbert from Warlord Gorgutz 'ead 'unter, a notorious Ork Warboss from the 'Warhammer 40,000: Dawn of War' series. His headstrong, self-righteous nature, coupled with his barbaric bloodlust on the battlefield and disregard for his allies made him a perfect base inspiration for Umbert.

Another influence on Umbert's persona was Urdnot Wrex, from the sci-fi game 'Mass Effect'. Wrex is an extremely bad-tempered, unfriendly, and short-fused Krogan, who at one point turns on the rest of the team in a fit of rage.

However, through some inspiration Annarima gave me, as well as looks at Iron Man and the Iron Dwarves, I came up with the idea of Umbert as he was when he died, the soulless, armored destroyer of the Dark Embrace, a being born for war, a symbol of carnage and destruction in it's purest form. 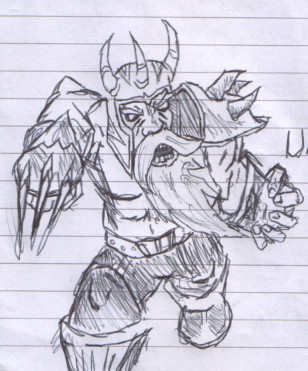 The Mortal Umbert by Hejin

Retrieved from "https://scarteleu.fandom.com/wiki/Umbert?oldid=31290"
Community content is available under CC-BY-SA unless otherwise noted.