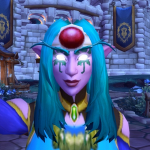 I have been Roleplaying for, uhm a very long time. Initially, I started out with SpaceMaster / RoleMaster Pen-and-Paper RP, which over time evolved into my own custom-made RM-based RPG. I did some RP in Neverwinter Nights, mostly with pesonal friends, and made the transition to MMORPG by starting on WoW in February 2006. I started on a PvP server, and quickly discovered that I absolutely, positively hated PvP. Thus, I rolled a new character on SWC in August 2006 and later transferred my first character to the server.

Retrieved from "https://scarteleu.fandom.com/wiki/User:Nouala?oldid=59761"
Community content is available under CC-BY-SA unless otherwise noted.