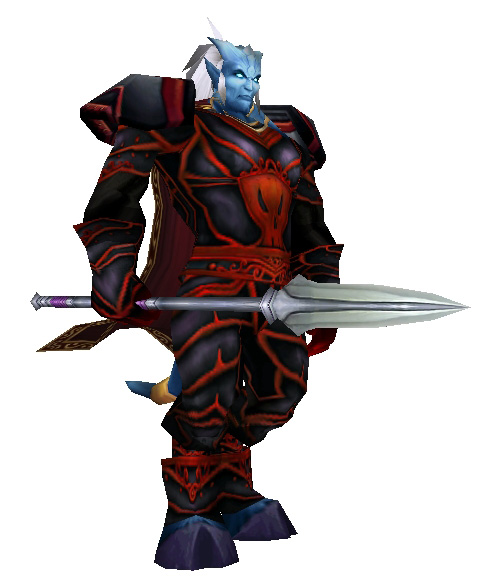 Young Draenei((17 in human years)) with a clear blue skin and snowy white long hair, always carried in a messy ponytail. He has a large scar running from his right brow all the way down to his chin which he isn't particuliarly proud of it seems. Apart from that he usually has a friendly smile on his face. There is pendant around his neck of his family crest, it hangs from a heavy chain and both ears are pierced by several golden rings. He has many different ways of dressing himself, though mostly in a heavy plate armor he can also be seen in a dark leather outfit for comfort. He has good posture, standing upright always and noticably using his tail for balance.

Apart from being a marksman he's a master Jewelcrafter and a master miner. Also a very good cook.

Xahryn was born shortly after the founding of Shattrath city as main Draenei capital on Dreanor, making him a very young Draenei. As the only child of a vindicator and anchorite he was raised into The Light and had never known any different. He had a relatively quiet youth back when the city still flourished.His father insisted that he too would become a vindicator some day, which at some point put a lot of pressure upon the back then, young child. His mother however told him he could be anything he wanted to be.

When the Orcs invaded Shattrath and destroyed it's sanctity he and his family moved to the last unfound Draenei settlement in Zangarmarsh. Though Xahryn had seen much bloodshed it had never seemed to get to him as much as others his age. He remained to believe in The Light and all it stood for, the deceased would find peace and rest, dying didn't seem all that scary anymore.
When the time came to flee to the Tempest Keep Xahryn had become strong and able enough to wield some basic weapons and even polearms, he was also most adept at marksmanship.


In the struggle for control over The Exodar a most terrible accident happened, Xahryn witnessed how both his parents were murdered while fighting to protect him from harm. A passing by Draenei had to forcefully pull him off his parents' corpses to come along to safety. He still can't remember much about the flight through the void.


The crash came harsh to Xahryn, he hadn't been sent to the escape pods as he had hidden somewhere on the Exodar. As the ship hit the ground he was trapped between several crystals and as some shattered a single shard of the crystal hit his right eye. It took the workers nearly a day to find him in the rubble.

During the month of recooperation he read up on Common and learned the language fairly quickly. He can sometimes be seen translating for Draenei who haven't learned the language just yet. His right eye remains a problem even today, he has a larger 'blind spot' than usual and has a bit of fuzzy vision from time to time.

The Arrach'nayu family started on Argus and has only a few known surviving branches left. One being Arrach'oah. Most of the original Arrach'nayu all succumbed to Sargeras' lure. There are several other branches, but as most of the survivors of the Arrach'nayu family today are female it would seem that the Arrach'nayu family might end if the females were to be wed. Through Xahryn's recent discoveries he found out that the largest part of the family is indeed still alive. They call themselves the Coven of Arrach'Nayu and are lead by The Arrach primarch Ezorael Arrach.

None yet and he intends to keep it that way.

Exact Age: 189
Birthdate: January 12th
Height: 2,25m
Marital status: Single father.
Personal quote: "I will not rest until the enemies of Dreanor are eradicated."
Expert with all ranged weapons, however prefers using Bow or Crossbow. He has also mastered the polearm.

Strolling around Stormwind, reading books in the Cathedral and spending time with friends, Xahryn takes time to live and do everything he likes to do with care. Sometimes seen in Stormwind accompanied by a large cat named Argus (after the Draenei Homeplanet). During his travels on Dreanor his usual good demeanor has changed into a darker form, angry mostly at the Burning Legion and the Blood Elves for destroying everything he ever held dear. He has lost all remnants of faith he had in the Light. Though still able to understand belief in it he himself refuses to be deluded any longer. His former job as mercenary ended in becomming the leader of the independant mercenary group Reconciliation. Though after the dissapearance of his lover and the birth of his daughter, Xahryn stopped his role as acting commander of the mercenaries and spends his time with his child now.

Retrieved from "https://scarteleu.fandom.com/wiki/Xahryn?oldid=20662"
Community content is available under CC-BY-SA unless otherwise noted.